The Difference Between a Windmill and Advanced Wind Turbine Technology 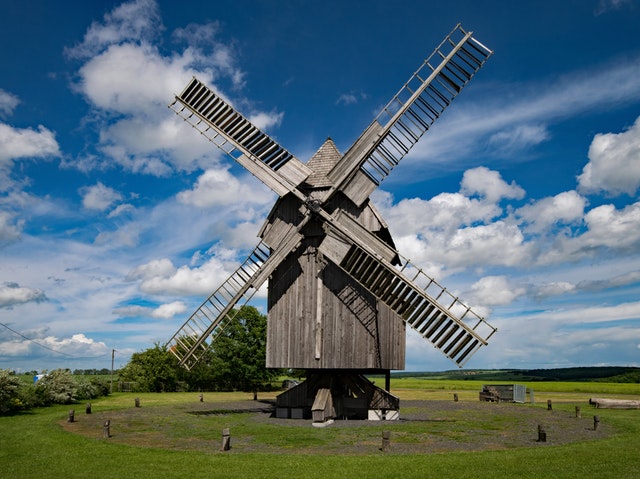 To begin with the conclusion: A wind turbine is not a windmill — or a wind pump. Windmills and wind pumps have been around for 100s of years. Windmills have been used to mill grain, and wind pumps have served to pump water from the ground and drain it to clear land. Wind turbines — just like hydroelectric dams and nuclear power plants — generate electricity, and modern wind turbine technology has put them in a class by themselves.

The only thing they have in common, outside of a few mechanical features, is that they’re driven by wind. Let’s look at the difference between a windmill and a wind turbine you’d find today on a hillside or shoreline — it’s truly amazing to see what modern blade pitch technology can do!

The Difference Between a Windmill and a Wind Turbine

A Short History of Windmills

In the United States, wind pumps became much more widespread than windmills. From 1850 to 1970, wind pumps sprouted like weeds across the country, with more than 6 million popping up. Most provided water to farms and livestock.

The first electricity-generating wind turbine showed up in Ohio in 1888. But it wasn’t until the 1970s — in the midst of the Oil Crisis — that turbines able to generate more than about 25 kW arrived. Since then, advances in wind turbine technology have created sophisticated machines clustered over 100s of acres at a time while descendants of the livestock watered by wind pumps graze beneath their blades.

Windmills convert wind energy into rotational energy that turns a mechanism to grind grain. These mills have come in a variety of forms, but the principle remains the same. The energy is used to turn grinding stones that convert grain to flour. Most windmills even have the ability to pitch the blades! This is accomplished by adjusting the shape and size of the cloth blades to account for changes in wind conditions.

Wind pumps use wind energy to rotate blades that, in turn, cause a transmission rod to move up and down, raising and lowering a piston. The piston is part of a pump. A cylinder in the pump fills with water when the piston descends. When it ascends, water becomes accessible in a tank, well or pipe.

Windmills and wind pumps are like today’s wind turbines in the way the Wright brothers’ first plane is like a B-2 stealth bomber. Both need the proper atmosphere to operate. In a discussion of windmill vs. wind turbine, though, the similarities end here.

Wind turbines generate electricity that can be used immediately at the wind site (say, for a rural or distributed wind application) or transferred long distances to locations where electricity is needed. The end product is electrical power, not water movement or flour. There’s no milling or pumping at the wind turbine, although the electricity it generates can be used to do that.

To generate electricity, a commercial wind turbine stands anywhere from about 30 m to 100 m above the ground to take advantage of faster, more stable winds. The rotor, which consists of the blades and hub, is connected to a pitch control system consisting, in part, of a pitch actuator system. Wind energy companies taking advantage of high-end versions of this blade pitch technology benefit in that the actuator deftly stabilizes the speed of the rotor and stops it safely if conditions are dangerous. This advanced wind turbine blade technology maximizes cost-effectiveness and turbine life.

A low-speed shaft may be attached to the rotor. This, in turn, connects with a gearbox that increases the rotational speed to levels needed for the generator to create electricity. (This is not always the case. There can be a drivetrain with either high-speed or medium-speed aka optimum speed output. There are also direct drive turbines with no gear in the drivetrain.)

These modern machines are governed by a main turbine controller that receives inputs from all the various subsystems, communicates with the operations center, and has the final say on safe operation. Advanced electronics are a major part of every system that runs a wind turbine today.

To call wind turbines windmills is to misstate their function and purpose. Wind turbine technology improvements have carried wind turbines to a level far beyond our ancestors’ wildest dreams.

To get a better idea of what an advanced pitch actuator system can do vs. a run-of-the-mill (pun intended) system, click below and ask a question!

Who’s to Blame for the Electronic Components Supply Shortage? China Tariffs: How Will They Affect Electronics Manufacturers?