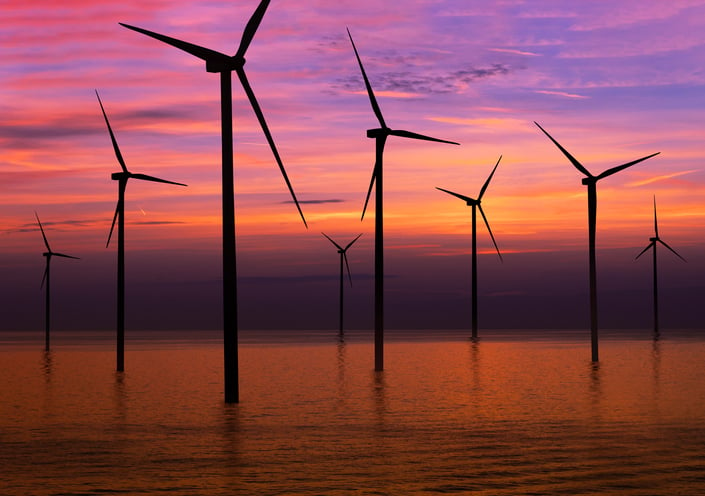 Despite offshore wind turbines coming much later, their basic design is nearly identical to onshore wind turbines. However, there are a few key differences in design, and most of them start from the ground up.

The environmental factors that must be considered for offshore wind turbine design make production efficiency on open water a challenging prospect. But the technology is improving, and the increasing demand for low-cost and efficient wind energy is already driving innovations forward.

Wind turbines built on land typically use concrete foundations. Offshore turbines may require more creativity when it comes to foundations, depending on the depth of your build site.

The biggest difficulty with offshore wind turbine design is not the actual turbine. Onshore turbines can largely be replicated for offshore use. The issue is that some standard design options are prohibitively expensive to use in deep water, especially with multiple wind turbines. Many foundation solutions common with inland applications don’t scale well for deepwater applications.

There is variety in the way offshore turbines are set up. Some are built on subsea towers; others are floating or semi-submersible and anchored.  It all depends on the ideal location to capture wind.

A lot of the technology used for offshore turbine structures and foundations is borrowed from the oil and gas industry. The base and the semisubmersible technology, as well as the anchors and standard practices for maintaining stability, are straight from the playbook of that industry – which has been maintaining offshore structures for decades.

Foundation design is a hot topic in offshore wind energy production at the moment. There’s a lot of discussion right now on how to revolutionize the design of these foundations to more effectively tap the potential of the offshore market. Cheaper structures lower the overall cost of the energy produced and make projects possible.

Depth of Water & Distance from Shore

Setting up an onshore wind turbine is usually much more simple than an offshore one. With offshore construction, you have to factor in water depth for subsea structure consideration and distance from shore for laying cables to bring the electricity to market.

In the world of wind energy production, shallow water is considered anything 30m or less in depth – these are usually conventional tower structures planted on the seafloor. Once you go beyond 30m, you’re in a transitional area where a lattice structure would be used for the subsea portion of the tower. Sixty meters and deeper is considered deepwater, and wind turbines here are anchored semisubmersibles.

The rotor size in the turbine goes up as you go further out from the coast.

All offshore wind turbines are pitch-controlled because there is more power per tower (catchy, isn’t it?) with blade pitch control. Offshore turbines are typically larger because in addition to being well-suited for constant offshore breezes, an offshore foundation is a much larger percentage of the turbine’s overall cost (compared to land) and it is important to squeeze every possible megaWatt out of the structure before building the next one.

The cost of a pitch control system does not substantially increase from onshore to offshore applications. The power stage might become larger, but the brains are the same. For this reason the pitch actuator becomes a bigger percentage of the cost as a turbine gets smaller, but the opposite also happens as the turbine gets bigger. In other words, the cost of a cutting-edge pitch actuator is a drop in the bucket for offshore projects.

The biggest benefit of offshore wind is that it’s dependable and steady. Even in shallow water, the wind tends to more dependable than onshore. Steady trade winds contribute to strong electricity production numbers at offshore sites.

Inland, the wind also has to compete with:

The steady wind offshore means that there will likely be more wear on the turbine. Using strong, well-made components with long life cycles will make offshore turbine upkeep less of a problem.

One problematic part of turbine depreciation offshore is the inevitable saltwater corrosion that comes with the territory. The turbine’s materials must be marine-grade — even the pitch control components not directly exposed to the weather must be extremely corrosion-resistant.

Every wind turbine should be as maintenance-free as possible — minimal downtime equals maximum profit. But the need for a hassle-free farm is greatest in offshore turbines. Between the unpredictable weather and the logistical challenges of reaching the turbines, performing maintenance on offshore towers is difficult and much more expensive than onshore.

Bridging the Gap in Offshore Potential

The inner workings of offshore and onshore wind turbines are largely the same. The differences come in the location where you’ll plant the seeds of your farm.

Two developments are helping to bridge the gap between wind turbine companies and offshore’s potential. The first is the continuing innovation in deepwater foundations. The second is the use of versatile blade pitch systems that are adaptable to larger turbines and minimize risky maintenance.